Before you read: the days before the departure had been very stressful, mostly for personal reasons. However, I was lucky enough to travel with my husband who had been to Japan several times before; he handled the whole thing all by himself. I paid little to no attention to the details that usually make it harder to go to a foreign country. And for that, I am very thankful. It was much needed.

In other words: you may want to get travel tips from someone else.
Unless it has to do with Idols, obviously.

I had never taken the plane before so this truly was an experience. My biggest concern was related to using the toilets on board; I didn’t want to, but turns out I’m stronger than I thought. However, I couldn’t sleep at all and got a headache that lasted long after we landed in Narita. I fell asleep in the hotel’s common room; it was still early morning and our room wasn’t ready yet.

It was midday when we decided to walk around a little bit so we headed to Akihabara. The rainy streets led us to various stores —my husband was mostly looking for some Symphogear goods— and I eventually ended up inside TRIO. There I bought my two first Idol CDs: NON STOP ROCK by Party Rockets GT and TEAR DROPS by Hime Kyun Fruit Can. I also purchased two Oya Shizuka photocards because I had to; they were there, in front of me! How could I not have done so?

We then ate at a kaitenzushi and went back to the hotel. DAY 2: Adventures at a board game café

We spent the following afternoon in Shibuya, where we had planned to meet a friend of ours. He recommended the meals from Gold Rush, which we got, and afterwards we went to Tokyo Records, HMV and the like. It was high time I completed my Idol CD collection. I was missing PASSPO☆’s last album Cinema Trip and their 2015 Tokyo Dome City Hall DVD; thankfully I found them. I also got a few other things, but not so much actually. It was only the second day, after all!

My husband absolutely wanted to go to Village Vanguard and so we did. I understood his motivations (besides the Inio Asano art) when we arrived: the place in itself feels like an adventure with all those various goods and this trendy atmosphere. It is very easy to spend a lot of time just looking at the store shelves… there are so many things and for all tastes! 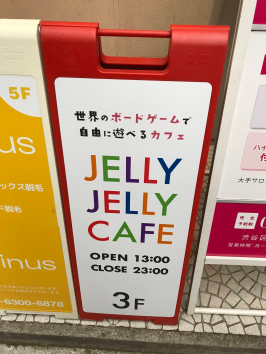 Later on, we headed to Shinjuku for a very special event that was taking place in Jelly Jelly Café —a board game café. Former Idol and now singer and board game creator Rameru Suzuno was holding an event this very evening. I had made a reservation so I was looking forward to it.

When we finally found the building, we went up and I hesitated at the doorway so I went down again, only to find myself facing her. She looked as surprised as I was; I waved at her and she invited us to go inside and wait for her. Which we did.

This was such a great evening, really. Rameru had picked games which suited the situation and she did her best to explain each rule so that we would understand. A translator I had met through social networks (she translated Rameru’s board game into English) arrived a bit later and made it easier for us to communicate.

We played to Nine Tiles, Penk!, Party Kingo, Quarto, Nut so fast and even Island Mahé before we had to leave. I was lucky enough to be able to get her own board game called Ramet Summit and one of her CDs. In addition, she had brought her former unit’s single as a present for me, which was genuinely sweet and so unexpected! I was so happy. We even took a picture together; what a perfect way to end the evening.

I’m still very pleased with the outcome; my husband now really likes Rameru as well. She is very inspiring and I look forward to trying her newest game, hopefully in a near future.